0 Telemark Diaspora around the world 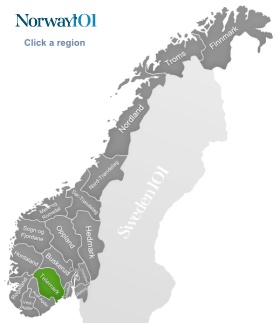 The Norwegian region Telemark is known for the Telemark canal, which used to be called the eighth wonder of the world in the past, for the old farms (of which you can visit some), for the mountain regions and for the heavy water sabotage during World War II. The Norwegians successfully prevented the Germans to produce the heavy water that was needed to produce atom weapons – and who knows what would have happened if not for the Norwegian heavy water sabotage (did you ever learn about that in school?).

The Gaustastoppen mountain is the highest mountain in the Telemark region (about 1,880 metres high), and the top of it can be accessed via a rather popular hiking track. The walk up to the summit takes only about two hours if you are an averagely fit person and don't stop to admire the beauty of the surroundings. You can also “cheat” and travel inside the mountain by using the Gausta Line. No matter which method of getting there you choose (you could always travel up inside the mountain, and then walk down – or the other way around), you will be rewarded with amazing views, especially when you get up there on a nice day. You can see up to 17% of all of Norway from the viewpoint at the summit

Jomfruland is the place to go for people who love birds. The climate and the vegetation on this island attract 60 to 70 different bird species who nest on the island during the breeding season. The island is also known for its long boulder beach and the fact that there is absolutely no traffic on the island – apart from cycling. You get to the island by taking a ferry from Kragerø, which is a nice place to stay, too.

If you have read “The Wild Duck”, then you know who Henrik Ibsen was. If not: he was a rather famous dramatist, at least famous enough to dedicate a museum in Skien to him. His former childhood home was transformed into a modern museum. Visit the museum, and then have a walk around Skien to see where some of his inspirations came from.

If you would like to learn more about the aforementioned heavy water sabotage, then a visit to the Norwegian Industrial Workers Museum in Rjukan is a must. This is the place where the sabotage operations were executed. One part of the museum focusses on the Norwegian heavy water sabotage, and you can earn more about the saboteurs there. The other part of the museum focusses on the importance of Rjukan as an industrial center in Norway.

Morgedal – the cradle of skiing

If you are interested in skiing, then you need to visit the Norwegian Ski museum in Morgedal, as this town is the place where skiing as we know it today was born. The museum has some interesting exhibits with the ski models that were quite revolutionary during the 1850s. You can view a video of the history of skiing through time, and even visit a ski-making workshop if you would like to learn even more about how skis are actually made.

The Nissedal potholes are an interesting display of how nature works over time. Big potholes were formed at the side of the river because of the constant swirling of rocks and gravels. In summer, the potholes can become quite warm because the rocks heat up. The potholes are ideal swimming holes for people of all ages, and on warm days they can become very popular

The Telemark canal, called the eighth wonder of the world (by the Europeans of the time), was finished in 1892, and was hewn out of the rocks of the area by hand by 500 men. There are eight locks with a total height difference of 72 metres on the canal that is a total of 105 kilometers long. If you would like to experience what it is like to travel through the locks, and also travel back in time a little, then all you have to do is go on a canal cruise with the MS Telemarken, the MS Henrik Ibsen, or the MS Victoria.