0 Nordland Diaspora around the world 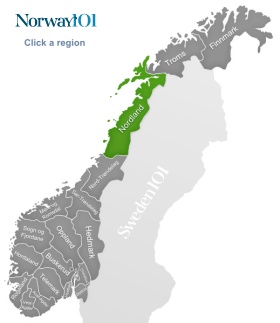 From prehistoric rock drawings to a modern certificate that proves you've visited the Arctic Circle: Nordland is a region that has plenty to offer for visitors. Nordland, which basically means Northern land, shares a long border with Sweden on one side, and meets the ocean on the other side. It is quite a narrow stretch of Norway, but packs a lot of interest into it. You can see the world's most violent and strongest maelstrom, take part in a traditional Viking feast in the longest long-house you will ever see (and enter), and you visit a variety of UNESCO world heritage sites in which you can learn a lot about the culture, heritage and history of this fascinating Norwegian region.

Saltstraumen is a spectacular sight: four times a day, when the tide is turning, you can watch how large maelstroms form in the sound that connected the Skjerstadfjord with the Saltenfjord. Apart from watching the strongest maelstrom in the world, there are also plenty of other water-based activities (many of them depend on the tide, so you need to check the time). You can go on wildlife safaris, or just go on a leisurely cruise on one of the tourist ships.

The Lofotr Viking Museum is a must see if you would like to learn more about how the Vikings used to live. The living museum is centered around the longest Viking long-house that has ever been found. It is 83 meters long, and most likely used to be the seat of one of the most powerful Viking leaders of the past. The long-house has been restored with a living and sleeping area, and sometimes there is also a Viking feast where visitors can enjoy a more or less traditional Viking feast. During summer months, there are also plenty of Viking centered activities available to visitors, and the general museum gives visitors a great insight into the life of Vikings.

Of course, you couldn't miss out on visiting the Arctic Circle center as the Arctic circle runs through Nordland. In the center, you cannot only learn about the Arctic circle, you can also see the world's largest stuffed polar bear, drink a nice coffee and have a snack, and buy special stamps. You can also get a visitor certificate that will confirm that you have visited this special geographical spot. It's very touristy, but that's just because it's really something one should not miss.

There are around 6,500 islands in the Vega archipelago, and the whole group of islands has been given a UNESCO world heritage status because the fishermen in this region still use traditional techniques, and are a good example of how fishing did not change that much over time. It also is a place where 210 bird species have been sighted, and where you can learn more about Eider down harvesting, which is a very interesting process, as no animals are even touched during the process (and once you learn how it works, you can also appreciate why Eider duck down is one of the most expensive downs you can get). Of course, this also means that bird watching is one of the most popular activities on the Vega Islands. Those Eider ducks (and the other 209 possible species) are just majestic birds and have quite unique characters (they sound a little like pigeons when they make certain sounds). The Vega Islands are a very special place, like a step back in time, and ideal if you would like to learn about heritage and experience Norway in a different way.

Stetind is not only a special mountain because of its unique look with the smooth sides, it's also special because it has been voted the “Mountain of Norway / National Mountain”. Stetind is the inspiration for many works of art, especially paintings and can often be seen on tourist postcards. You should not attempt to climb the mountain though because the first successful attempt to get up to the summit only happened in 1910 (after many failed attempts), and even today, it's not exactly a very popular climbing spot. Do some hiking in the surrounding area instead and enjoy the views of this mountain.