0 Finnmark Diaspora around the world 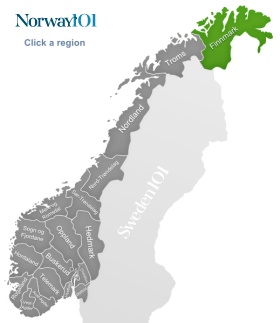 Finnmark is the Northernmost part of Europe, and the Northernmost and Easternmost region of Norway, the place of the midnight sun, ideal to watch the Northern lights – and a region of contrast. While it is the biggest region in Norway, it is also the least populated one. In some areas of Finnmark you can walk for hours without ever meeting anybody else (unless, of course, you are in one of the areas that are very popular with visitors).

Finnmark is the coldest region in Norway, and some places can be also quite cool during summer, so while the scenery is really lovely, and the water looks tempting, you might not really enjoy the water temperature that much.

Sami is the home to the Sami people, who are the indigenous people of that region. They also have their own parliament, and the seat of it is in Finnmark (in the village of Kárášjohka). If you are interested in indigenous cultures, then Finnmark is one of the best regions in Scandinavia to learn about the Sami people.

If there's a paradise for people who enjoy watching birds, then Finnmark is definitely one of the contenders for the crown. From arctic ducks to guillemots: you can see so many different birds – even the King Eider can be spotted in Norway (a very majestic bird indeed). The Varanger peninsula (a bit more about it see below) is one of the best places in Northern Europe to watch birds – and it does not matter whether you go in winter or summer. There will always be birds, and plenty of other bird watchers because the region has a very good international reputation.

There is a total of five national parks in this spacious region of Norway, and each of them has something special to offer to you:

If you love pine forests, then you should visit the Stabbursdalen National Park, as this national park is home to the world's most Northern pine forest. The Øvre Anarjohka National Park does have no special forests, but it is probably the most untouched part of the region – and the region in itself is untouched already, so for nature at its best, this is a good choice.

The Øvre Pasvik National Park is a great place to explore the largest expanse of virgin forest in the whole of Scandinavia.

The two most Northern glaciers in Scandinavia can be found in the Seiland natural park – an area that literally and figuratively speaking can take your breath away. It's incredibly beautiful and fascinating.

Last but not least: the Varangerhalvøya National Park, which is a peninsula that lies within the Arctic climate zone. It's not very warm at any time of the year, but it's definitely one of the most scenic places you could ever visit. When you see the national parks of Finnmark, you can also get an idea about why Tolkien had such a fondness for Scandinavia, and you could easily imagine Rivendell being located in one of those National Parks.

Alta is the largest city in this Norwegian region, and the best place to start your exploration of this region, especially when your goal is to learn more about the culture, the people (including the Sami people), and the heritage of the country. You won't find many historical buildings in any part of this Norwegian region, as it has not been “civilized” for as long as other parts of Europe, and many of the older buildings had been destroyed during the bombing raids of World War II.

One thing Alta is known for is the “Aura Borealis tourism”. You'll find that a lot of people simply visit the city to check out the Northern lights, and Alta is indeed one of the best places to watch that spectacular natural event.

There is, however, also something else that's quite interesting: a UNESCO world heritage site with prehistoric rock carvings. There are five different sites where you can see the carvings, and the largest can be easily found close to the Alta Museum (which you should definitely visit) – you don't even have to try to see the other sites because they are not accessible for normal mortal beings, i.e. the public. The rock carvings are a proof that people have lived in the region for thousands of years.