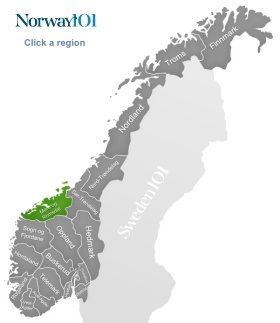 Møre og Romsdal is a region of Norway that people mainly visit because of the beautiful landscape and the fjords. While the natural attractions are a magnet for tourists and local visitors, it is not a very touristy place though because it is further North than the other Fjord areas, and tourists usually end up going to Bergen, which is the famous gateway to the fjords. Møre og Romsdal, however, also has plenty to offer even though there are no big cities, and you would be best off if you had your own car to explore the region. There are usually bus connections (and one single train line), but some villages only have one or two bus connections a day, so getting around can become quite an effort, and you will have to plan your moves well if you would like to explore the area via public transport. Car drivers will be able to drive one of the world's most scenic drives, and drive over the construction of the century (a road).

While Møre og Romsdal does have a lot of culture and history for the visitor who is interested, the fjords and the Atlantic Road are the two most popular destinations for visitors. The landscape is breathtaking, but don't miss out on visiting some of the villages along the way to learn more about life and history in this Norwegian region.

The Atlantic Road is quite an interesting stretch of road for various reasons. It has been voted as the most beautiful road trip by the readers of the Norwegian newspaper Aftenposten in 2007, and many car manufacturers use the road to test their cars, as the Atlantic Road has been named as one of the best roads to test cars on. So you sometimes might come across some quite fancy cars along that road. In 2005, the Atlantic Road was named the Norwegian construction of the century because it is a fine piece of architecture that had to deal with quite a few challenges (like the twelve hurricanes that happened during the construction period) during the planning and construction stage. It is also one of Norway's 18 official tourist routes, i.e. one of the routes that have a particular sight-seeing interest for visitors to Norway (or national tourists, too).

Åndalsnes in itself is just a small village but a good spot to start exploring the surrounding mountains which are spectacular and are named after pieces in a game of chess. The road that winds through the pass between the valley of Isterdalen and the valley of Valldal is called Trollstigen, and another road that has a great scenic value for visitors. While you are exploring, you also need to have a look at the Trollveggen, which is a special place because there is no higher vertical overhanging rock face in all of Europe. Åndalsnes is also a stop on the only train line in this Norwegian region.

Geiranger is the best bases to explore the UNESCO-protected Geirangerfjord, which is without a doubt one of the most breathtaking mainland fjords in Norway, and a very popular destination for local and international visitors. A good tip for visitors is to not take one of the more expensive tourists ships but take the ferry. The ferry has a comfy lounge, a snack bar and information about the region in different languages – and it does cost a lot less than the tourist ships. If you would like to explore the fjord in a more active manner, then you could also hire a kayak and head out on your own, or take part in one of the very informative guided tours.

Molde – The city of roses

Molde is a great city for people who like plants, and is often called the city of roses. However, there is a lot more to Molde than that. Molde has its own cathedral, which might not be quite as old as other churches and cathedrals in Europe, but it still worth a look because of its Gothic design. You can take guided tours of the city, visit museums, take cruises or go hiking. Molde is a great combination of history, heritage and outdoor adventures.

Aure is not a very big town, but it has quite a few interesting features for visitors. One of them is one of the biggest churches made of wood in the region: the Aure Church. While the current church building dates from 1924, it is assumed that there has been a church in that location since 900AD. The triptych of the church is also quite old, and comes from 1460.

Aure is also the best place if you would like to see one of Northern Europe's wildest saltwater maelstroms, the Foldfjordstraumen maelstrom. You need to watch the tides, so you can find the best time to check it out.